Powering into the future with Airbus A330neo #A330neoTour

“Experience being on a proving flight of a new aircraft” were the exact keywords I googled when I first got to know that I was invited to join a proving flight out of my home base airport – Kuala Lumpur. The results of the search in a way indicate that it is kind of a unique “money can’t buy” kind of flight experience.  Not many have experienced it and the fact that it involves a brand new version of the Airbus A330 family – the A330neo makes it even more special.

If you have flown on an airbus widebody aircraft, high chance you have been on an Airbus A330. With over 1,370 A330s in service with 125 airlines worldwide, the aircraft is the most popular widebody aircraft ever.  With such popularity, it makes commercial sense for Airbus to introduce a more efficient version and in July 2014, the A330neo programme was launched.

Fast forward 4 years later, the A330neo is almost ready to enter its commercial service with its launch operator, TAP Air Portugal. Just like any new aircraft type, a route-proving flight test exercise is required to demonstrate to aviation authorities its compatibility with airports and readiness for airline operations. This is what #A330neoTour is all about.

Early morning of June 28th, 2018, thanks to Airbus and their local PR agency, I was ready to tick another item off my aviation to-do checklist – to be on an aircraft manufacturer’s proving flight.

After covering Portugal and the American continent, the A330neo was in Asia for a series of trial flights.  Kuala Lumpur was selected as the base for the aircraft during the 55-hour long Asian segment of the trials as it is home to the world’s largest A330neo customer – AirAsia X. Today’s flight, Kuala Lumpur – Jakarta – Kuala Lumpur.

Passengers on board: a group of Airbus employees conducting testing and a small group of local Malaysian media including me!

I knew it was a special flight the moment we were breezed through the check-in areas straight to the VIP lounge for breakfast and briefing by Airbus.

This is where my question of why Airbus is pushing for both A330neo and A350 was answered. Both are great aircraft and quite a few features of A350 introduced into the A330neo as well but in the end airlines have their set of preferences and this is where by having both types of aircraft, Airbus has the advantage of drawing more orders.

With briefing completed, we were transported by bus to the remote gate of KLIA near the Bunga Raya complex where a pretty sight awaits us.

Not every day you get to see a new aircraft version and a TAP Air Portugal in KL International Airport!

So excuse me for being a bit too excited.

Together, these advances bring a significant reduction in fuel consumption of 25% compared with older generation aircraft of similar size.

The A350’s signature cockpit raccoon / bandit mask has also been adopted to the A330neo. Nice!

With only a few “passengers”, we were given the chance to sit at the Business Class cabin.

The aircraft is fitted with the TAP Air Portugal’s cabin interior comprising 34 seats in Business Class, and the flat bed recaro seat looks premium and comfort enough for long-haul flights. Of course, every airline would have their own customised configuration to suit their operating model.

As the aircraft taxiing towards RWY32R of KLIA, the 202 seater aircraft passes some of the larger capacity Airbus models. I can’t help but to think that for some airlines, the ability to cover a certain range and a high efficient cost with lower payload makes more sense vs flying large capacity but hardly full planes. Perhaps this is why demand for jetliners like the A330 and A350 continues to increase.

KLIA was one runway down due to maintenance; hence traffic was a bit busy.

I was really anticipating the take-off phase of the flight to experience how powerful yet quiet the 2 Trent 7000s are. Unfortunately with such light load of less than 50 people on board, it was quiet a quick take-off roll before we were airborne. Quite an “effortless” take-off if I may say.

Even the spotters were “complaining” on how they missed out on the aircraft rotating shot. Photo by Tn Hj Norman Md Yusof

The A330neo also carries quite a number of enhancement for passengers experience thanks to once again the features from the A350. So the moment the seat belts sign were switched off, I went to discover some of these features starting with the economy class. 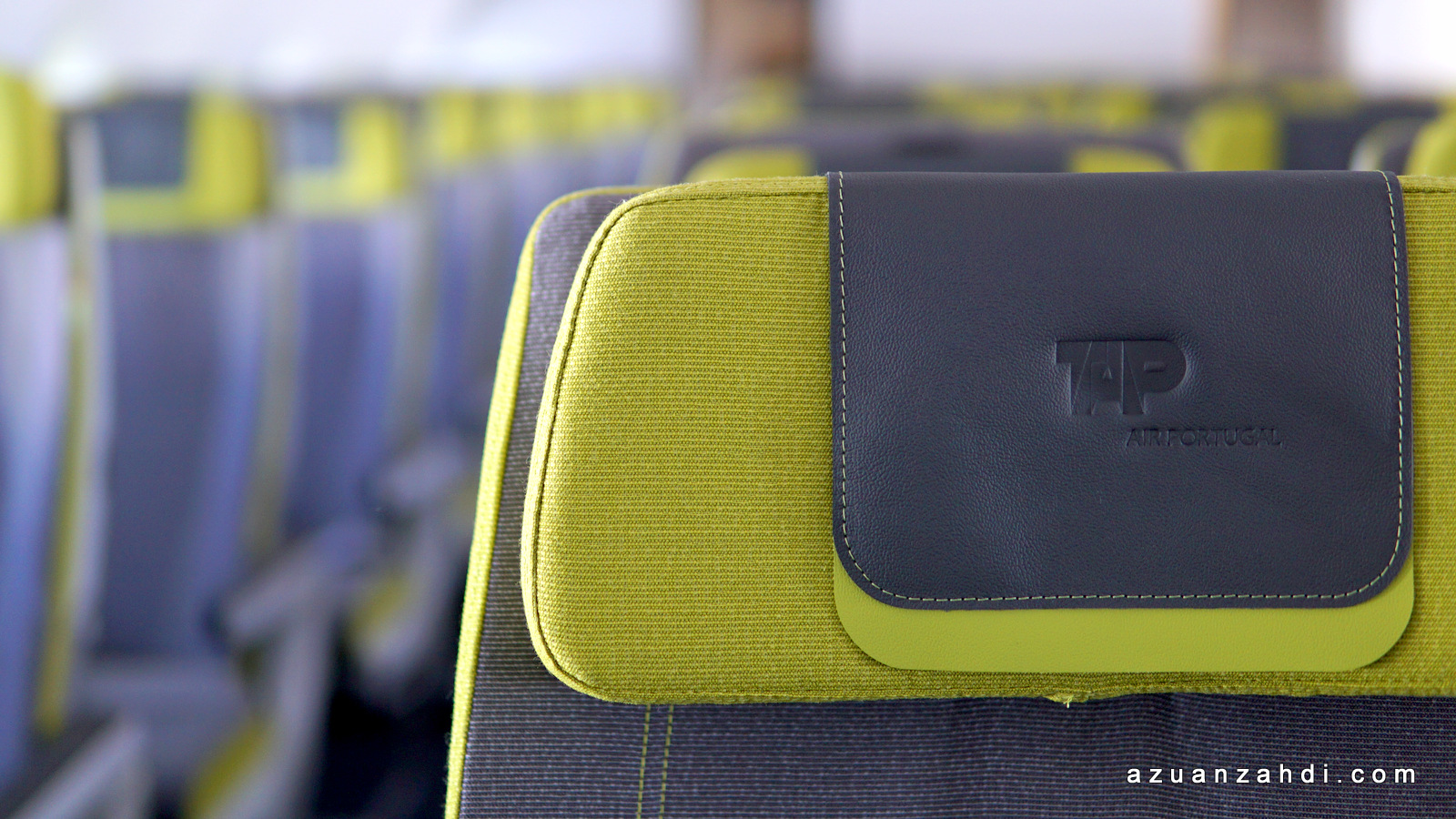 I have to admit that TAP Air Portugal’s Economy Class cabin theme in terms of colours is quite nice. Fresh yet easy on the eyes.

Airbus has long been promoting comfort via standard width seats and judging from the look of these seats, it looks like one can be ensured of a comfortable flight for long hauls.

And as part of the Airspace by Airbus concept (which I wrote about when I visited the Singapore Airshow here), the A330neos has a new outer/lateral overhead bin design that allows up to five bags to be placed in each four-frame bin instead of three in the current bin.

Some other features include fourth-generation inflight entertainment, which means HD viewing resolution and no more bulky IFE box in your foot area.

Wheelchair accessible lavatory configurations thanks to the Space-Flex lavatory feature.

For the crew, the A330neo offers some good news too. An expresso coffee maker, chillers and ovens with baking functions just to name a few.

We arrived in Jakarta on-time despite the delay in departure. A small welcome party awaits us as the superstar of the day attracts attention of guests and airport community in Jakarta airport.

On the return flight to Kuala Lumpur, I decided to be a normal “passenger” and just enjoyed the flight especially the comfort of the business class seat.

And the media had the opportunity to also witness the modern cockpit of the A330neo. My first reaction was “hey it is quite similar to the A350”. The Common-Type-Rating (CTR) minimises flight training time and cost and maximising pilot productivity. The modern upgrade of the cockpit allows technology such as tablet EFB and dual Heads-up Display.

Beautiful blue sky and lovely A330neo sharklet. This is sexier too in comparison with the earlier A330 winglet.

One last tour of the cabin. Flying on an empty plane – checked.

The aircraft landed smoothly in KLIA and within minute taxied to klia2 terminal. This is the home to home to the world’s largest A330neo customer – AirAsia X. Altogether, the airline has ordered 66 A330-900s, for delivery from 2020.

Having flown on quite a few A330s operated by different airlines, I see the A330neo as a nice modern upgrade to the aircraft type. The improved efficiency makes sense to airlines bottom-line while the passenger experience enhancement helps to improve satisfaction levels.

It was an exciting day and I walked away from the plane smiling knowing that I had achieved something new off my aviation bucket list.

In celebrating this special flight, I’m giving away 2 of the Airbus A330neo luggage tags that I received on-board the route proving flight. All you have to do is to share this post on your Social Media – either Facebook or Twitter and leave a comment below on your most memorable flight on-board an Airbus airplane. I will select the 2 winners on  31st Aug 2018. Good luck.

Thank you Airbus and Quattro for the invitation.

Libreria Acqua Alta – one of the world's most Instagrammable bookstores.

The night our Young Tigers beat the South Koreans #AsianGames2018