A few days in Palestine was really an experience that I will cherish for quite a while. It is now one of the countries in my list of countries that I have visited but would like to revisit in the near future. What is it not to like about the holy land of Palestine – the serenity of the Al-Aqsa Mosque, the rich history of its land, the friendly people, mysterious lanes in the Old city of Jerusalem and the delicious kunafa dessert. Just to name a few!

Click here to read Part 1- Part 7 of this story.

Leaving the borders of Israel, a couple of us including myself got stopped for quite a bit. This, to be honest is not totally unexpected as our family names, first and last names can get rather confusing. After a couple of hours delay at the border crossing, we were on our way to our little side trip before heading back to KL – a night in Petra, Jordan.

Petra is a city worth a trip by itself. I am not being fair for visiting it for only 24 short hours so this would not be a full review kind of post, instead more of a sneak preview of ancient city of Petra.

It was a tiring 4 hours coaster ride from Amman to Petra.

Dating to around 300 B.C., Petra is a unique old city, home to tombs and temples carved into pink sandstone cliffs, and known by many as the “Rose City”. The amazing work carved into the sheer rock face by the Nabataeans makes it Jordan’s most valuable treasure and greatest tourist attraction.

Obviously with so much to see, seeing Petra at daylight would be the best option, but since we arrived late, we started our tour by signing up to experience the Petra by Night attraction.

We did the “Petra by Night” tour for 2 reasons, we only had half a day in the morning the next day to discover Petra so we want to max out our time at this beautiful place, also we wanted to do some star gazing.

True enough, only after about 10 minutes of walking, we started to see the sky full with beautiful stars.

Combined this with the view along Siq, a mile-long narrow gorge that leads into the city of Petra, we had 30 minutes of amazing view.

And the moment we reached Al-Khazneh or “The Treasury”, it was one amazing view even at night.

Being one of the most elaborate temples in the ancient Arab Nabatean Kingdom city of Petra, Treasury is really Petra’s main icon.

And for Petra by Night, this is where the “show” happens.

Some cultural performances including traditional flute and dancing aimed at mesmerising the visitors. To be honest, I wasn’t that impress. I was more interested with the view and the delicious tea.

Is Petra by Night worth it? If you have limited time and extra money, go for it. Else just visit in daytime where the real Petra experience can be enjoyed.

And that’s what exactly we did the next day.

The long walk into the Al-Khazneh via the Siq once again. 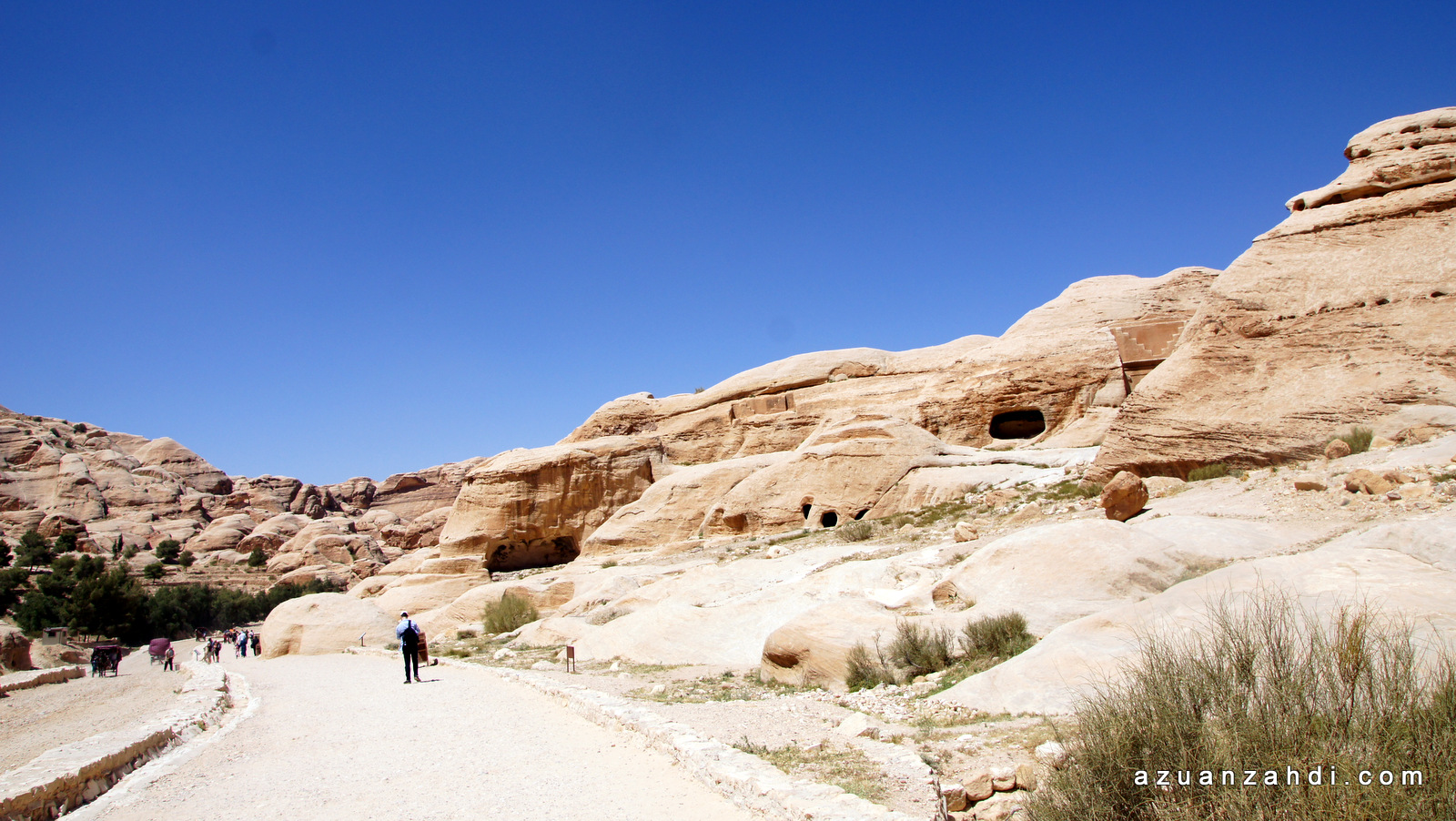 It is a long walk (options for horse and donkey ride are available) but walking would allow opportunities to take photos.

Like this Obelisk Tomb and Bab el-Siq Triclinium from 25-75 AD.

Every angle is so beautiful!

This is a must-have shot, the end of the Siq, where the iconic Khazanah appears.

Majestic at daytime too!

We had limited time so we just did a quick 90 minutes’ walk around the place. Such a pity as one could easily spend days here!

We will definitely come back here once again insyAllah.

A souvenir from Petra.

The rose city of Petra is a great way to end our 7-day trip to Amman, Palestine and Petra.

Alhamdulillah, except for the fact that it was tiring, we had a blast will not hesitate to do it again. The fact that the situation in Palestine can change rapidly, I would advice anyone thinking of visiting Al-Aqsa to just do it. Do it soon. We never know that one day, the “doors to Al-Aqsa” might be closed officially or “imaginatively”.

Although I paid for my own travel, I will not hesitate to suggest Andalusia Travel if you are interested to visit Palestine. The guide we had, Pn. Hjh Shalina and Mr Mahmood were not only knowledgeable and friendly but also willing to go beyond their normal duty in ensuring the satisfaction of the group members.