On one fine afternoon, I received an e-mail that made me exceptionally happy.

It was an invitation from Airbus for me to join a small group of Asia Pacific aviation bloggers to experience the 2016 edition of Singapore Airshow. Yes, this little blog of mine that contains 5 years’ worth of my personal aviation stories happening in Malaysia has been spotted by the big boys of aviation. That itself is a big virtual pat on the back for me.

While Singapore Airshow is not new for me having attended the year 2010, 2012 and 2014’s edition, the airshow this time is special as me and the other bloggers were given access to many parts of the show that I did not get to experience previously. Ask any aviation geeks and no one would say no to such opportunity. I am thankful to be chosen and please allow me to share as much as possible about the experience through my usual photo story telling blog post that by now my blog readers are familiar with 🙂 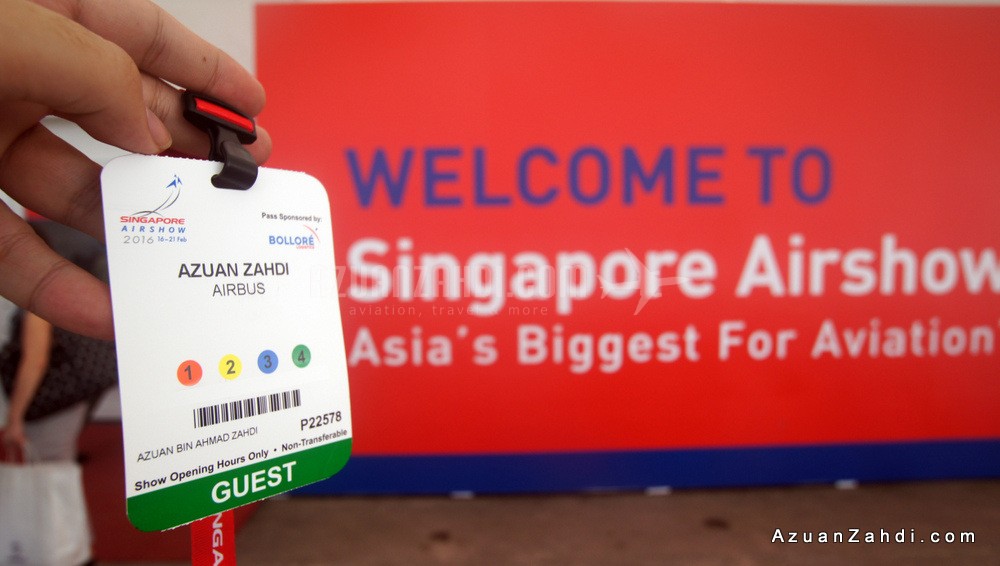 Even before arriving in Singapore, I was already treated like a king. Logistics arrangement made by Airbus’ appointed PR Agency (p/s: you guys are awesome!) ensured that I was well taken care off throughout the trip from flights, hotel, contacts, halal food, etc. Thank you.

Upon arrival in Changi, I was chauffeured driven to the hotel right smack in Orchard Road. I could almost immediately see how big Singapore Airshow is,with billboards along the short journey and advertisements on their double decker buses. Even my conversation with Mr Willy, the friendly transporter, was about how excited many of his friends were with the airshow that happens every 2 years. Aviation has indeed found a home here in this little modern country.

The Airbus’ Singapore Airshow Asia Pacific Bloggers visit programme kicked off in a warm manner with a dinner hosted by its Social Media Manager, Mr. Anthony Rosendo. It was the first time that the small group of bloggers from Malaysia, Indonesia, Thailand and Philippines met but with a common interest on aviation, conversations across the dinner table never got dry.  A great evening with great food, nice ambience and lots of insights on Airbus. 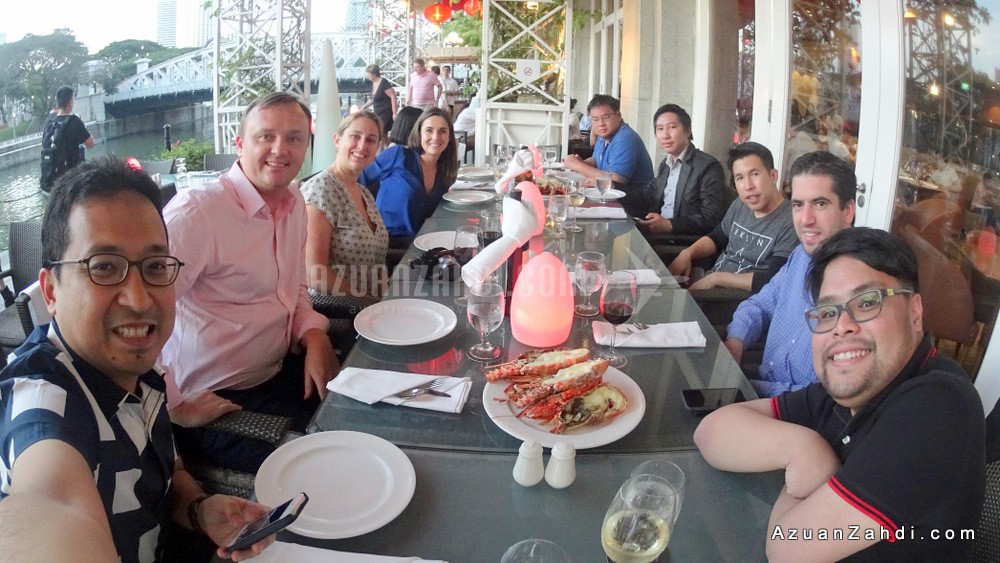 The conversations actually made me realised how big Airbus is in the region particularly in Malaysia.   As of January 2016, Airbus is the leading supplier of civil aircraft to Malaysia, with an 80% market share based on current fleet and aircraft on order for future delivery.  That is a total of 610 aircraft ordered by airlines in the country making Malaysia Airbus’ largest market in Asia outside of China.

With Malaysia’s home-grown airline, AirAsia continuous growth and Malaysia Airlines refreshing its fleet with the arrival of a few Airbus aircrafts for its long haul flights, we can expect more Airbus planes and its double blinking lights over Malaysia’s skies soon.

The event day. I can hardly sleep due to the excitement 😛

Singapore Airshow is a business event. During the past editions, deals worth billions were signed and despite the slower economic climate currently, it continues to be a platform for aviation players to engage their prospects and getting a step closer towards closing deals on the order books. 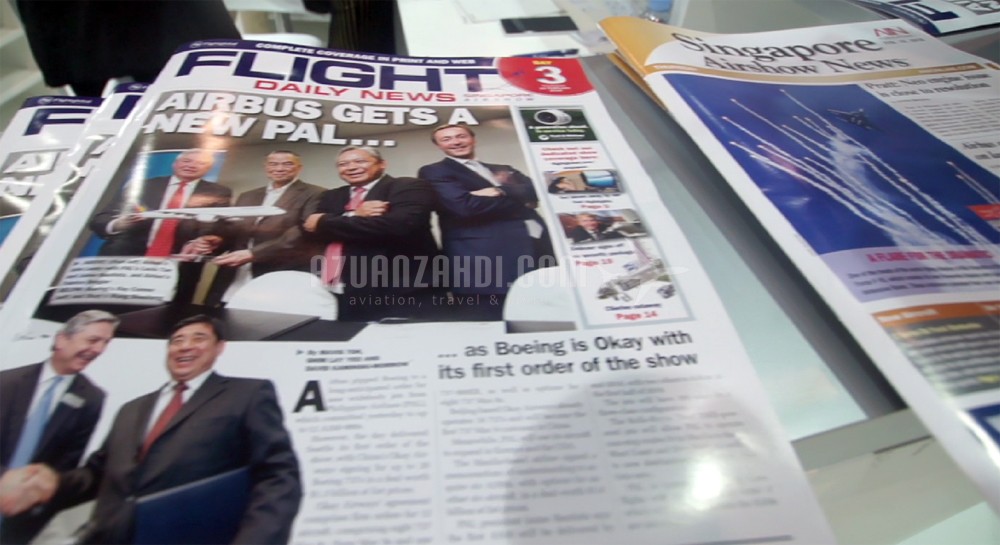 It was serious business during trade days and while it is more fun with less crowd, going through the many exhibition booths were quite a challenge given the limited time we had. Engine manufacturers, engineering components, defence systems, technology providers – you name it, you got it.

CFM for example proudly displayed their LEAP high-bypass turbofan engine. Despite the low oil-price currently, efficiently is still the way forward hence technology like these modern engines will help to drive airlines and aviation players forward. 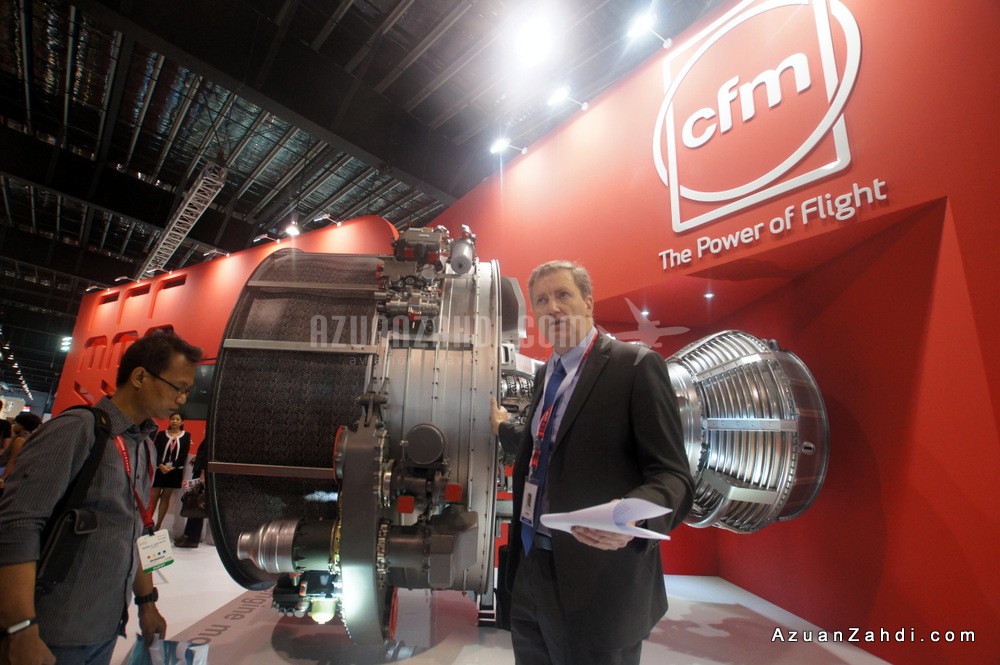 Back at the Airbus exhibition stand, the A380, A350XWB and A330neo were the main displays of this year’s show for the commercial market. 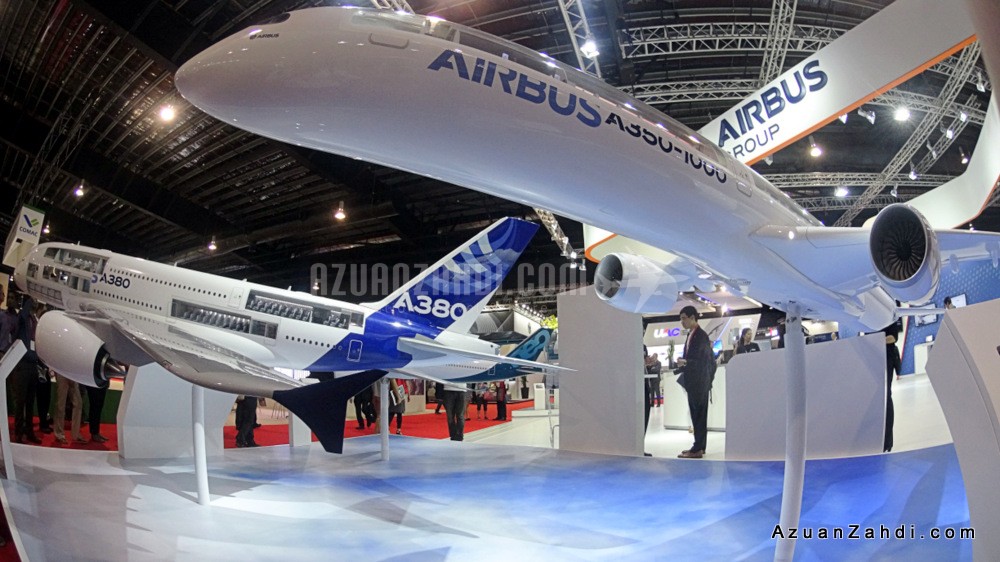 The models gave an idea on how the cabin configuration looks like inside an A350XWB. Extra wide, extra space, extra efficient. 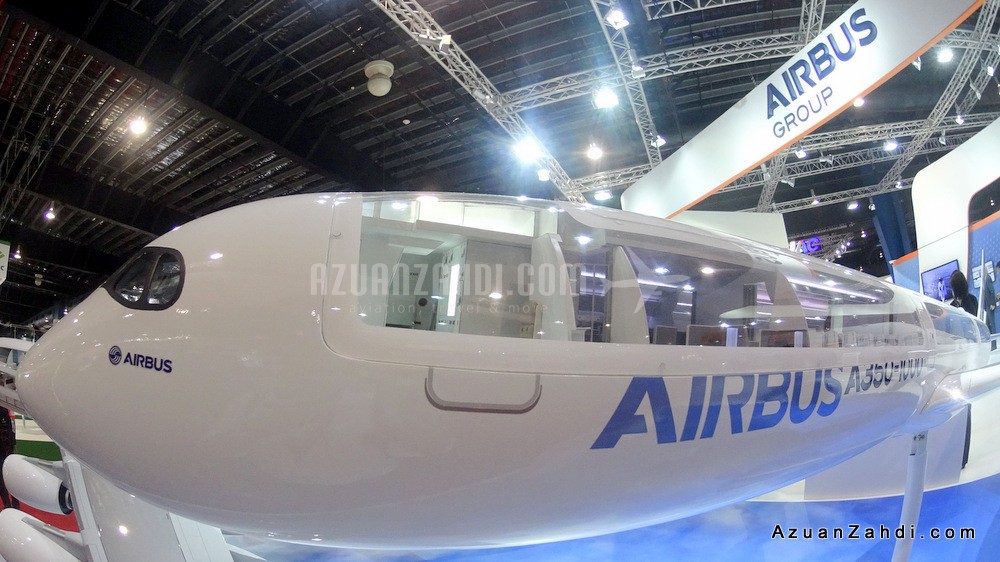 What if the giant models still can’t help you to imagine how the A350XWB cabin interior looks like? Not a problem. Airbus brought this cool virtual reality goggles which allows visitors to go through a virtual cabin experience on any of its planes. We got the chance to try it out and I can confirm that it is one cool gadget.

Still can’t figure how the interior looks like? Then you need to see the real thing. It is time for the static display! 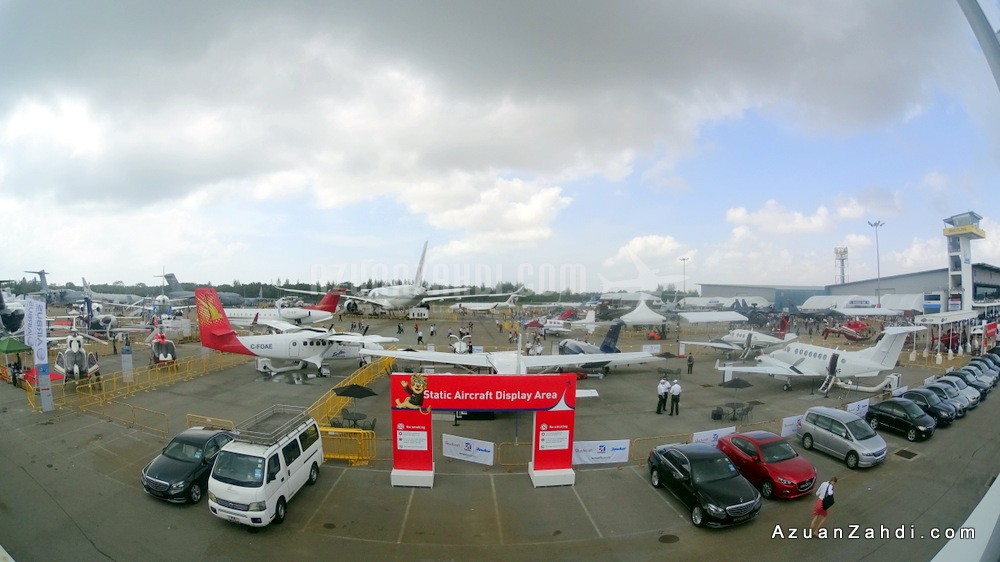 This is my favourite part of any airshow. The beautiful planes. Leading the list – 2 Airbus A350XWB. 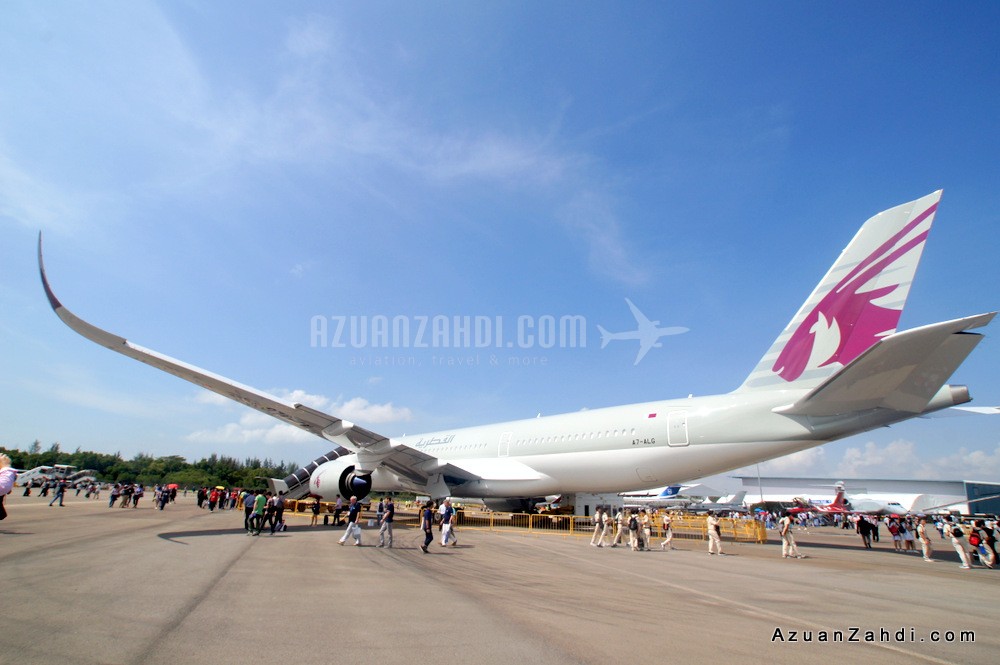 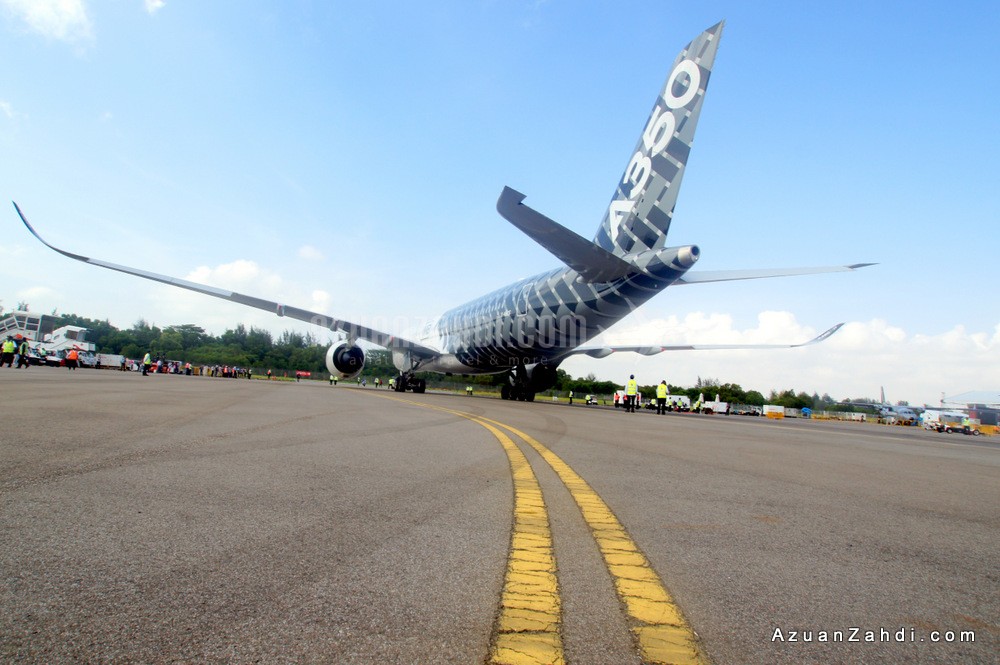 We were given a full tour of the A350XWB by Mr Won Lee, the A350 Marketing Manager. You might recall that back in November 2014, I had the opportunity to visit the interior of an A350XWB during its world tour stop in Kuala Lumpur (read here). Nevertheless it is still an exciting moment stepping into an A350XWB once again. 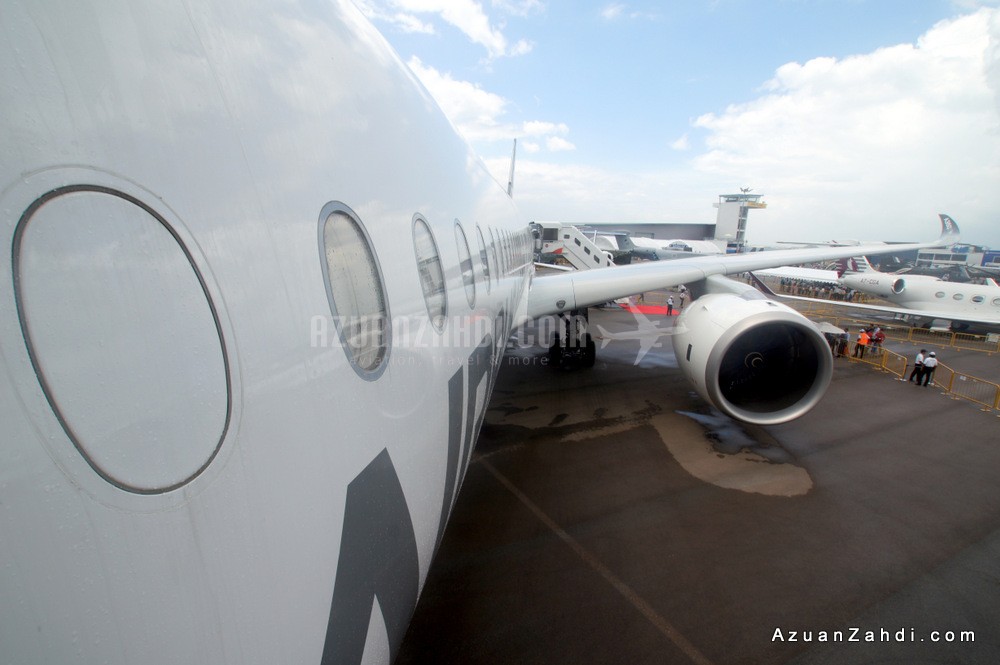 Interestingly our tour started in the back galley of the plane. Airbus was not kidding when they say the A350 was designed for all. Not only passengers but also the hardworking cabin crew. Extra space also translates into additional working area for the crew. 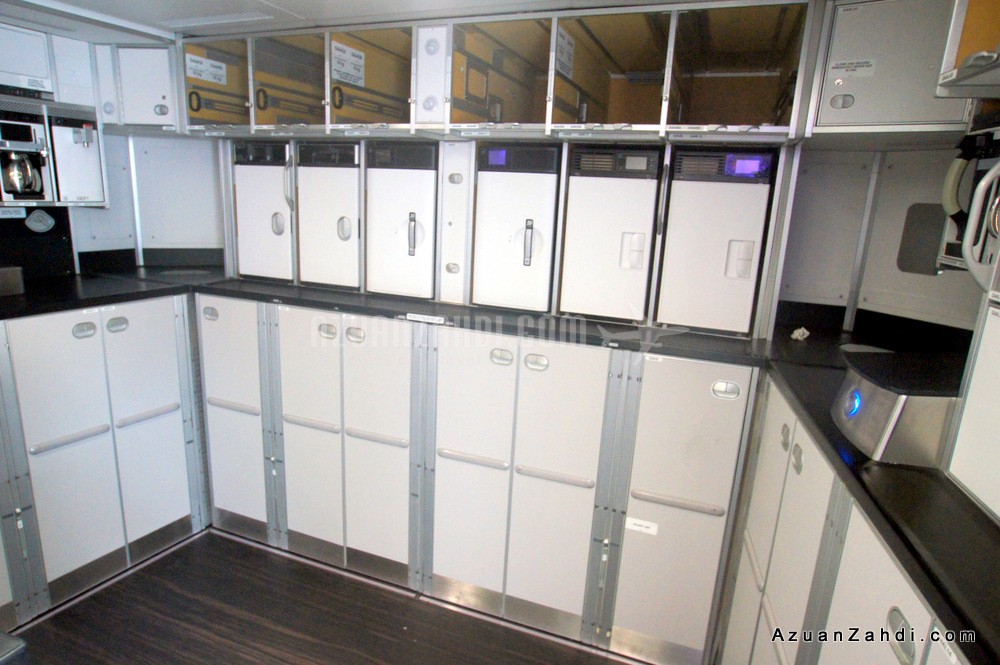 The good news does not stop at the galley. See that little cute stairs heading upwards on the photo below? 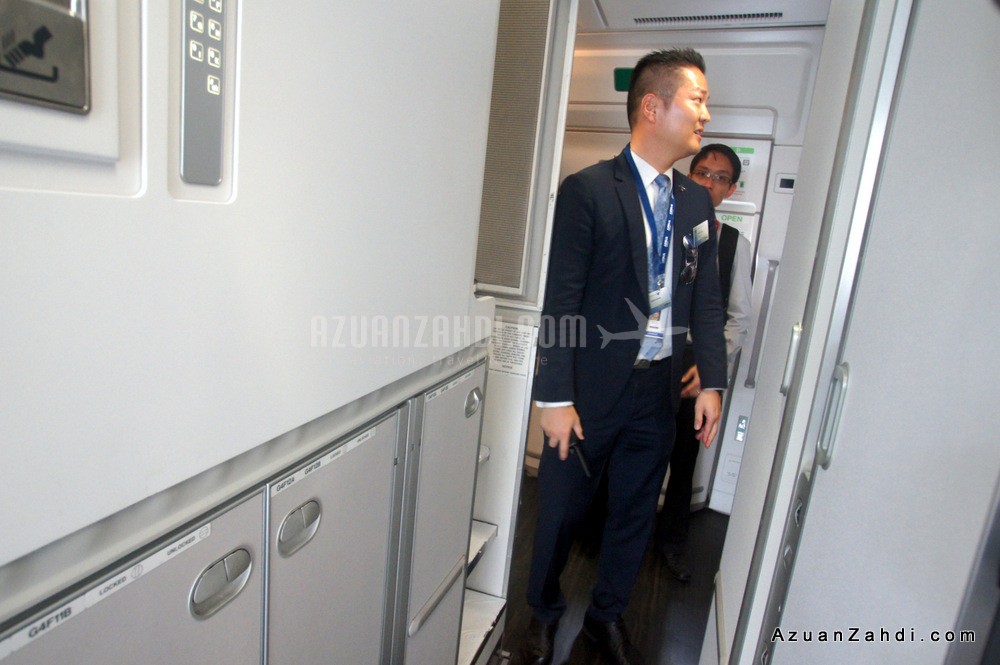 The A350XWB allows airlines to have a proper crew bunk. Instead of sacrificing passenger seats for crew rest, the airplane has a dedicated crew rest area above (amazing!) the last few rows of passengers. Just don’t go tell your wife after a flight that “the stewardess slept on top of me”. 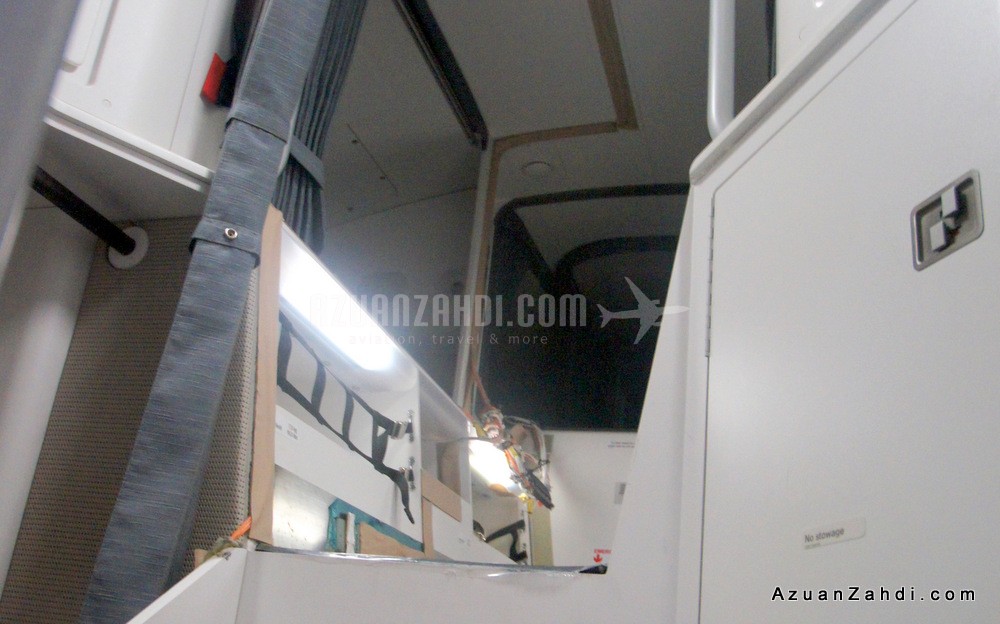 Since entering service one year ago, the A350XWB is setting new standards of efficiency and comfort in the mid-size wide-body market and has been especially successful in the Asia-Pacific region, where 13 airlines have already ordered the aircraft. Both Malaysia Airlines and AirAsia have shown interest on this aircraft which is good news for Malaysian travellers. Reason being, it is one comfy aircraft thanks to its extra wide design.

As we toured the economy section we got to experience the recommended layout of 3x3x3 configuration.  Airlines will have the final say but it feels quite OK on a long haul to be on that kind of configuration. The overhead compartment also carries a new design that allows more space to accommodate the ever increasing amount of carry-on bags being brought on-board by passengers. 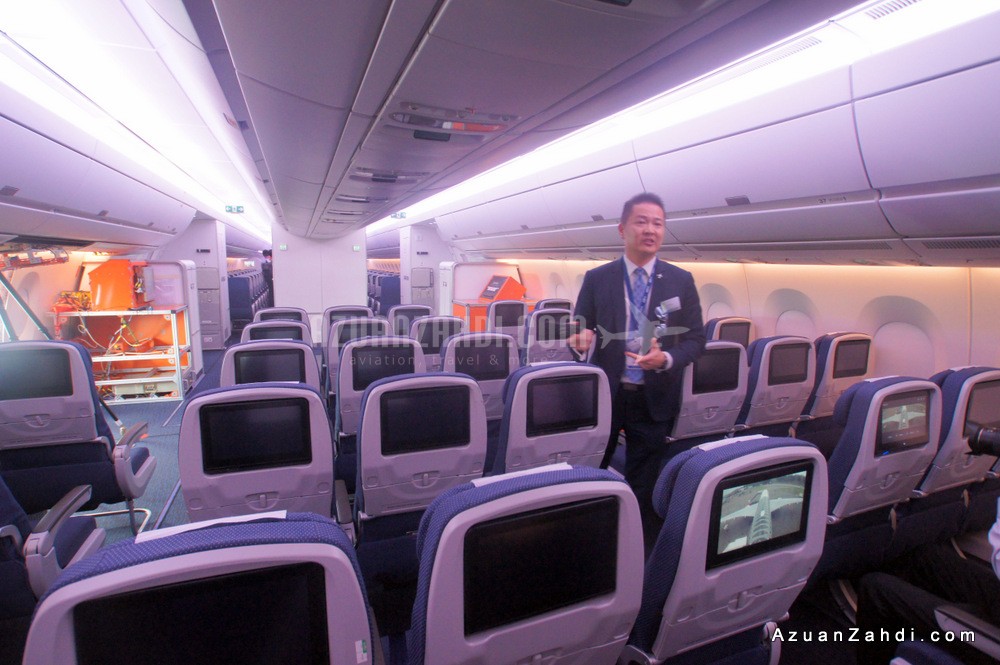 Similarly the business section will be customised by airlines but the “default configuration” has plenty of space. The best part is the idea of each passenger having access to aisle which is a must these days for business class seats. 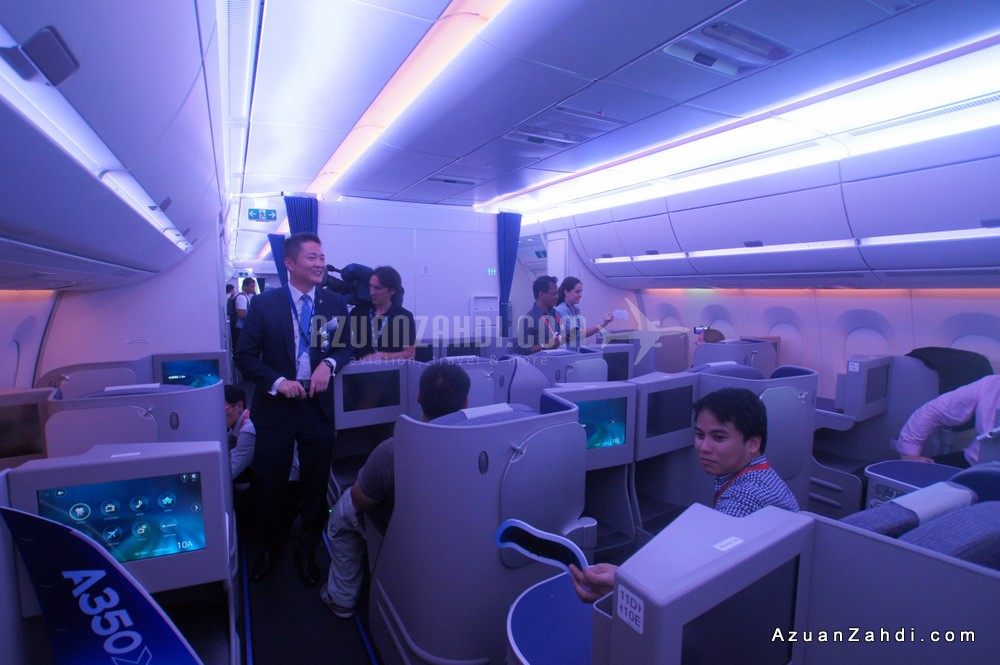 The highlight on the A350 tour must have been the quick cockpit visit.

Immediately noticeable are the large LCD screens that are crystal clear and easily accessible, clean layout of the panel and the nice heads up displays that many years back can only be seen on sci-fi movies.

Pilots do not need to unlearn and learn the A350XWB. Thanks to its common design with the rest of the Airbus planes, pilots now can jump into A350 quicker giving less interruptions to airlines.

I’m convinced that this is a beautiful plane.

Another proud moment for me being a Malaysian during the Singapore Airshow 2016 is when our group visited the Airbus A400M new generation airlifter plane. 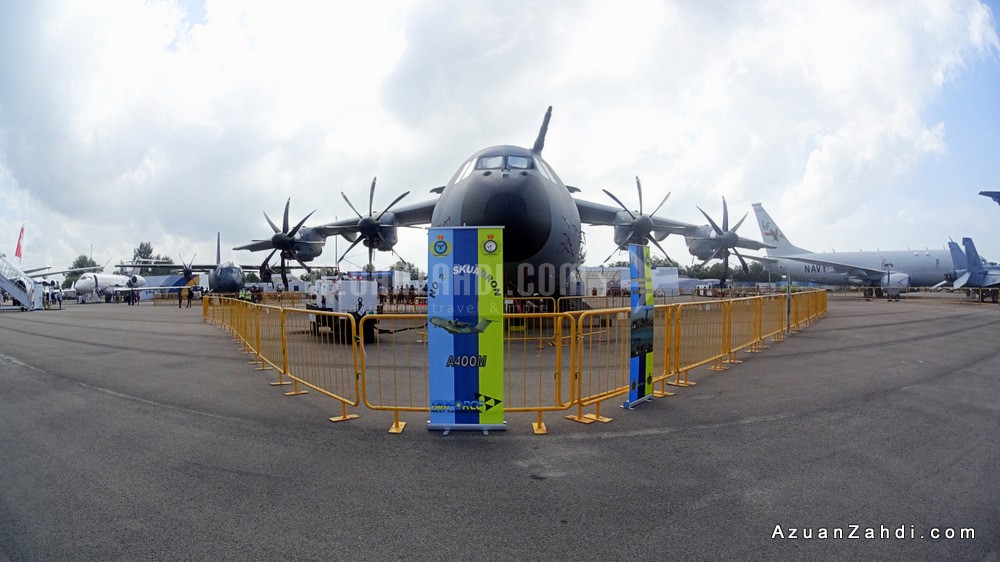 It is made by Airbus but the A400M on display was a Royal Malaysian Air Force aircraft being exhibited outside its home country for the first time. 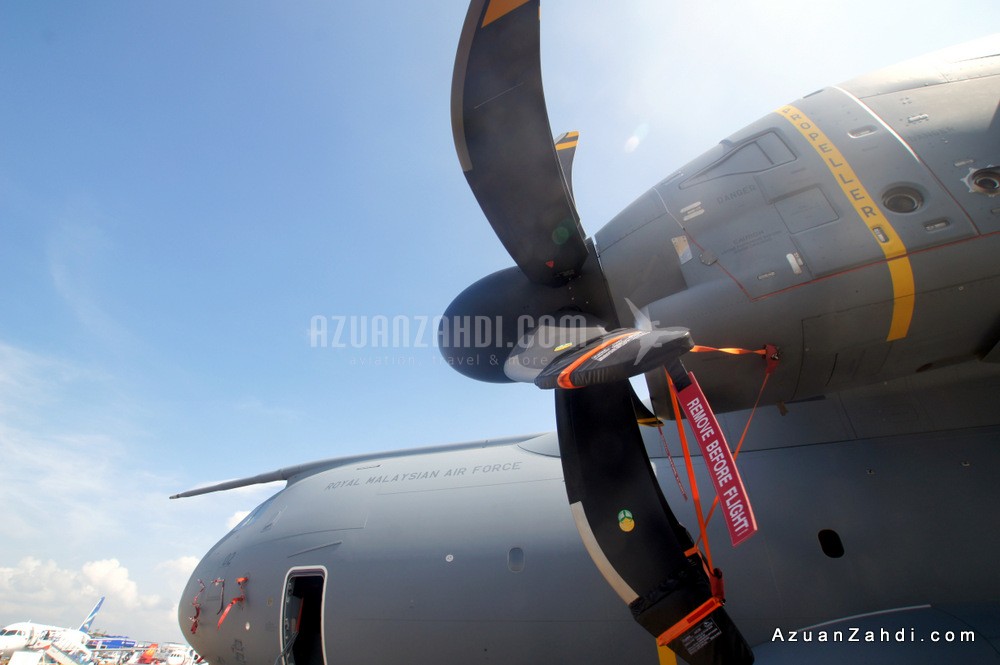 The A400M is a new generation multi-role transport aircraft which complements existing fleet of transporters available to RMAF. It enables the force to undertake a wide range of military and humanitarian operations within the country and regionally. 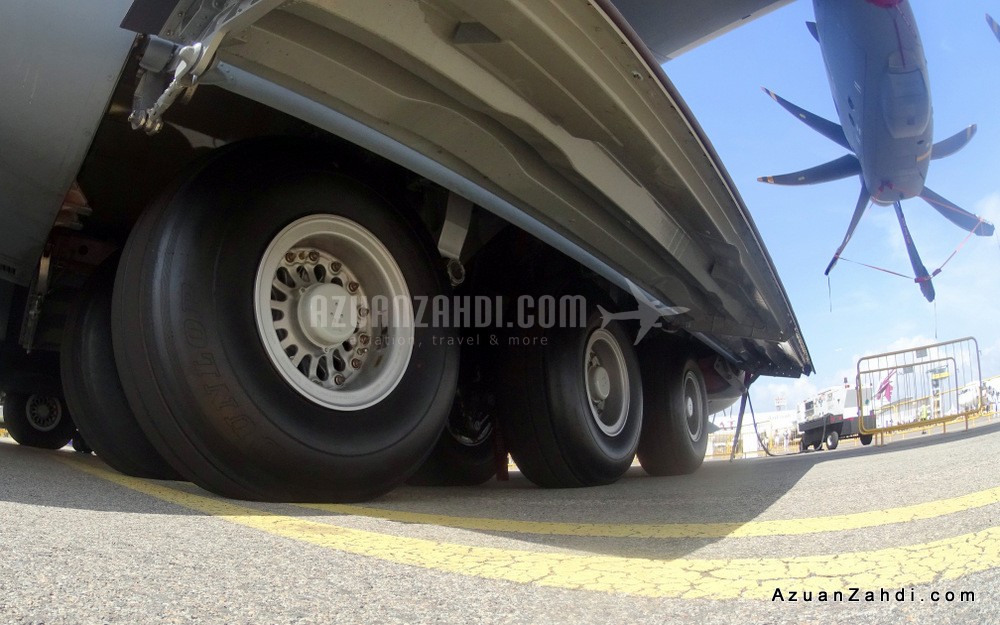 It is not everyday that I can get up-close and inside an A400M plane especially RMAF’s one. 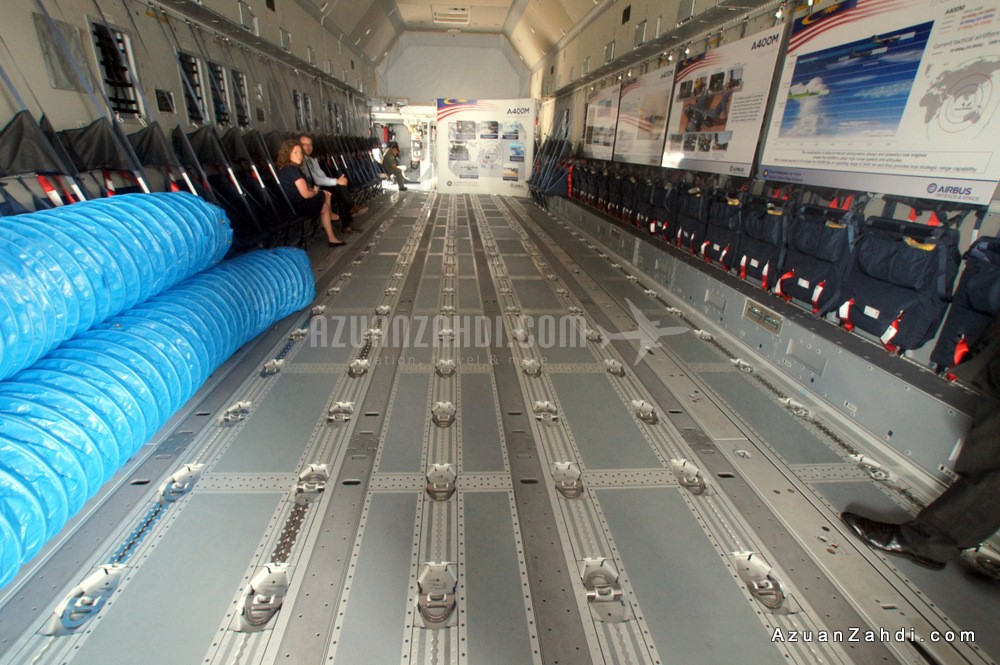 I still find it amazing that the aircraft could fly up to the speed of 0.70 at the height of 35000 feet. That’s airliners level already!

Thanks to the personnel at RMAF for the hospitality and answering my many questions.

One for the album. The failed attempt at doing a “hero coming out from a military plane” pose. 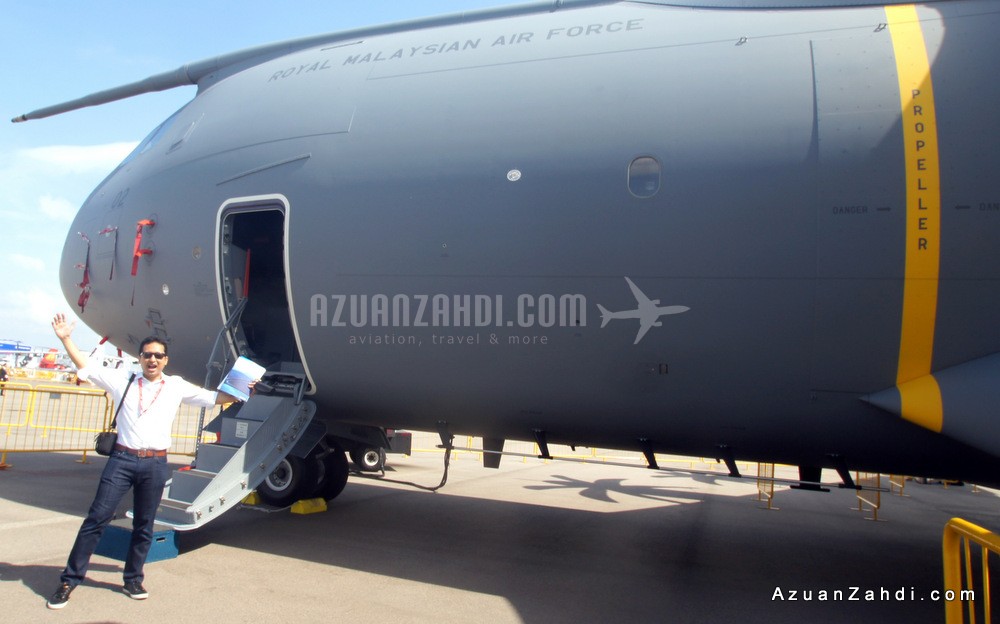 Just as I thought that the experience could not get any better, the aerial display starts! 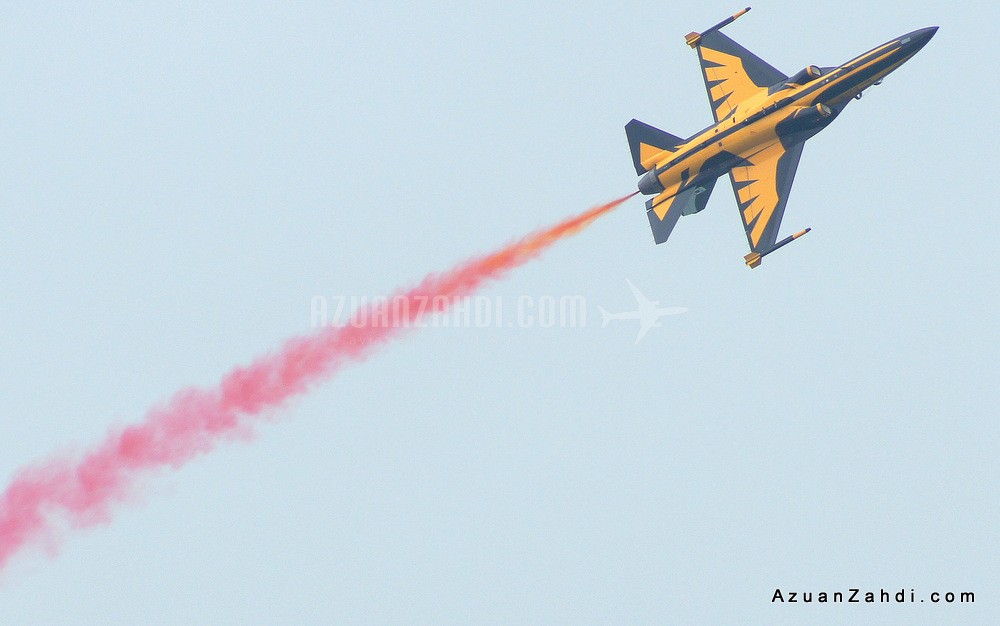 In my next post, I will share more awesome photos of the aerial display featuring the A350, the Korean  Blue Wings and Singaporean Air Force as well as many other static displays and cool stuffs at the Singapore Airshow 2016!

Part 1: The journey to Jerusalem, a quick stop in Amman.